Ciprofloxacin- and Azithromycin-Nonsusceptible Shigellosis in the United States

Alert_06
Archived: This Page Is No Longer Being Updated
This information is for historic and reference purposes only.  Content has not been updated since the last reviewed date at the bottom of this page.
Related Pages

CDC continues to receive new reports of infections with Shigella strains that are not susceptible to ciprofloxacin and/or azithromycin, the antimicrobial agents most commonly used to treat shigellosis. Most cases have been reported among gay, bisexual, and other men who have sex with men (collectively referred to as MSM) in Illinois, Minnesota, and Montana and among international travelers, but cases are also occurring among other populations. Shigellosis is very contagious and can spread quickly through communities and across different segments of the population.

CDC recommends meticulous handwashing and other hygiene practices to prevent shigellosis and encourages patients with symptoms of shigellosis such as diarrhea and fever to visit a healthcare provider. Clinicians should obtain stool cultures from patients suspected of having shigellosis, counsel patients about shigellosis prevention, and, when treatment is required, select drugs based on antimicrobial susceptibility test results. 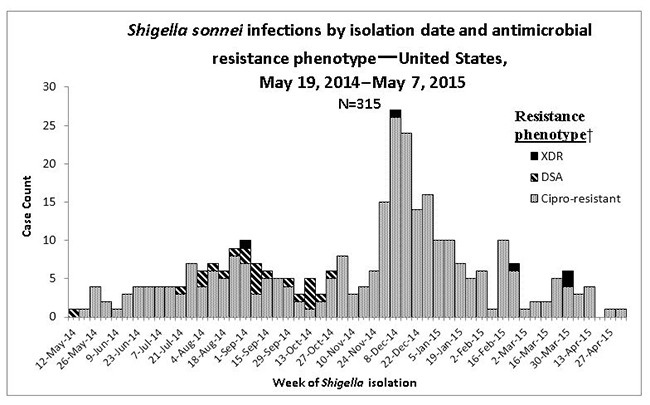 Patients infected with Shigella can protect others through the following actions:

Testing and Interpretation of Azithromycin Susceptibility among Shigellae

Antimicrobial susceptibility testing guidelines and interpretive criteria for azithromycin and Shigella have not been published by clinical laboratory organizations, such as the Clinical and Laboratory Standards Institute. CDC’s National Antimicrobial Resistance Monitoring System (NARMS) has developed a protocol to test Shigella for susceptibility to azithromycin using the disk diffusion method. Health department and clinical laboratories that wish to use the protocol for epidemiologic purposes may contact Davina Campbell at xew9@cdc.gov for more information.

Revisions to CDC’s Shigella Website, Including Prevention among MSM

Department of Health and Human Services

Links with this icon indicate that you are leaving the CDC website. For more information on CDC's web notification policies, see Website Disclaimers.