Alert_06
Archived: This Page Is No Longer Being Updated
This information is for historic and reference purposes only.  Content has not been updated since the last reviewed date at the bottom of this page.
Related Pages

The Centers for Disease Control and Prevention (CDC) and the Drug Enforcement Administration (DEA) are investigating recent increases in fentanyl-related unintentional overdose fatalities in multiple states across the U.S. The purpose of this HAN advisory is to: (1) alert public health departments, health care providers, first responders, and medical examiners and coroners to the possibility of additional increases in other jurisdictions, (2) provide recommendations for improving detection of fentanyl-related overdose outbreaks and (3) encourage states to expand access to naloxone and training for administering naloxone to reduce opioid overdose deaths.

Fentanyl, a synthetic and short-acting opioid analgesic, is 50-100 times more potent than morphine and approved for managing acute or chronic pain associated with advanced cancer.[1] Although pharmaceutical fentanyl can be diverted for misuse, most cases of fentanyl-related morbidity and mortality have been linked to illicitly manufactured fentanyl and fentanyl analogs, collectively referred to as non-pharmaceutical fentanyl (NPF).[2] NPF is sold via illicit drug markets for its heroin-like effect and often mixed with heroin and/or cocaine as a combination product—with or without the user’s knowledge—to increase its euphoric effects. While NPF-related overdoses can be reversed with naloxone, a higher dose or multiple number of doses per overdose event may be required to revive a patient due to the high potency of NPF. [3],[4]

In March 2015, DEA issued a nationwide alert identifying fentanyl as a threat to public health and safety. [5]  This was followed by a DEA National Heroin Threat Assessment Summary, which noted that “beginning in late 2013 and throughout 2014, several states have reported spikes in overdose deaths due to fentanyl and its analog acetyl-fentanyl.” [6] Similar to previous fentanyl overdose outbreaks, most of the more than 700 fentanyl-related overdose deaths reported to DEA during this timeframe were attributable to illicitly-manufactured fentanyl—not diverted pharmaceutical fentanyl—and either mixed with heroin or other diluents and sold as a highly potent form (sometimes under the street name “China White”). The DEA report noted that the “true number is most likely higher because “many coroners’ offices and state crime laboratories do not test for fentanyl or its analogs unless given a specific reason to do so.”[6] 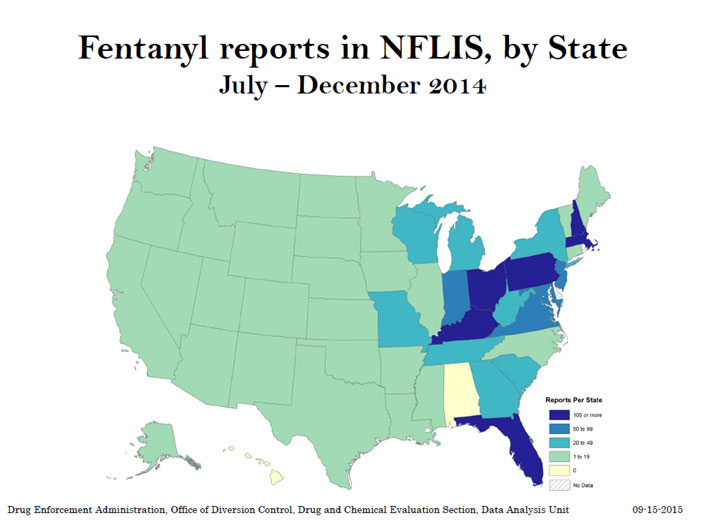 Fentanyl poses a significant danger to public health workers, first responders, and law enforcement personnel that may unwittingly come into contact with it either by absorbing through the skin or accidental inhalation of airborne powder.  In August 2015, New Jersey law enforcement officers conducting a narcotics field test on an illicit substance experienced shortness of breath, dizziness, and respiratory distress after coming into contact with an unknown substance, which forensic laboratory testing determined to be a mix of cocaine, heroin, and fentanyl.

CDC suggests the following actions in response to increases in fentanyl-related overdose deaths:

[10] Personal communication between CDC and Massachusetts Department of Public Health

[18] US Department of Justice, Drug Enforcement Administration. 21 CFR part 1310. Control of a chemical precursor used in the illicit manufacture of fentanyl as a list 1 chemical. Federal Register 2007; 72:20039–47. Available at http://frwebgate.access.gpo.gov/cgi-bin/getpage.cgi?dbname=2007_register&position=all&page=20039External.

Department of Health and Human Services

Links with this icon indicate that you are leaving the CDC website. For more information on CDC's web notification policies, see Website Disclaimers.

We take your privacy seriously. You can review and change the way we collect information below.

These cookies allow us to count visits and traffic sources so we can measure and improve the performance of our site. They help us to know which pages are the most and least popular and see how visitors move around the site. All information these cookies collect is aggregated and therefore anonymous. If you do not allow these cookies we will not know when you have visited our site, and will not be able to monitor its performance.

Cookies used to enable you to share pages and content that you find interesting on CDC.gov through third party social networking and other websites. These cookies may also be used for advertising purposes by these third parties.

Thank you for taking the time to confirm your preferences. If you need to go back and make any changes, you can always do so by going to our Privacy Policy page.